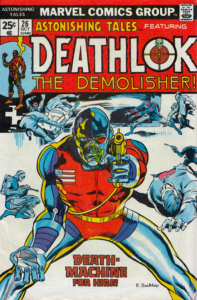 Welcome back to another Retro Review! This time, I am covering Deathlok. Deathlok first appeared in Astonishing Tales #25 (which I don’t have – my run of Deathlok begins with the following issues, because his first appearance fetches a pretty good price). Now, I came to the Deathlok scene a little late to the game. As I said, he debuted in Astonishing Tales #25, which came out in 1974. I had seen Deathlok around, but it wasn’t until Captain America #286-288, where I really got interested in the character. So I had gone back and collected the previous issues of Astonishing Tales that I could find (and afford, which – to date, was all of them, except his first appearance in Astonishing Tales #25). Like all my Retro Reviews, I enjoy going back and re-reading comics that I collected, because I enjoyed the series back then – and want to see how those same stories hold up today, to my older, more mature (well, that’s debatable) self. 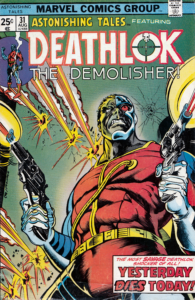 So I just finished reading all the issues of Astonishing Tales (except issue #25, which still eludes me), the Deathlok 4 issue limited series, and then the Deathlok series that ran in the 1990’s – and now I’m here to share my thoughts!

Now the Deathlok stories that ran in Astonishing Tales featured Luther Manning, a soldier who became Deathlok. The stories had their weak moments, to be certain (for example, Ryker – who was the main villain behind the series, seemed way over the top and entirely too difficult to believe) – and he had some pretty lame villains (all created by Ryker, like War-Wolf, and a super tank) – but over all the Astonishing Tales run over Deathlok remained a somewhat enjoyable read. I would not drop the title down as a must read for anyone; but if anyone had some time to kill and wanted to read a mostly entertaining series, I’d recommend it then. 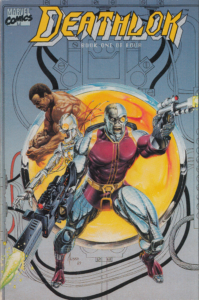 Marvel would eventually want a pitch for a new Deathlok series, and so Michael Collins, a pacifist and a scientist, would be tricked (and mostly forced) into becoming the newest version of Deathlok. Now, it’s a little odd that this version of Deathlok, despite being a new person, looks almost exactly (as Deathlok) as the Luther Manning version of Deathlok. With the same side of the face being metal, having the cybernetic eye, same color scheme and everything. Even the facial traits are similar, despite the fact that Luther Manning was white, and Michael Collins was African American. The only notable difference is the fact that Michael Collins as Deathlok doesn’t wear the American Flag on the armor, over his heart. Now all of that aside, the four issue limited series that introduces Michael Collins and how he becomes Deathlok, and the mental anguish he endures in regards to his family, makes this four issue limited series an excellent read. All four issues weave into one another very nicely; there’s a lot of character development throughout. 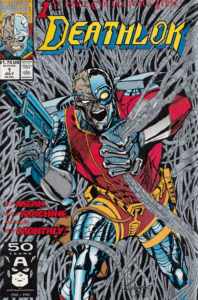 Then came the Deathlok series in 1990, featuring Michael Collins, continuing his role as Deathlok. The series started strong and interesting; but as it progressed, it became a roller-coaster of a ride; and not the fun kind; but the kind where “X” amount of issues would be really good, but then the next few issues would have absolutely no direction at all, and feel like fillers. Then there was a change in artists after awhile, where you could see the significant change – and usually not for the better. The starting art seemed fine; but later (it may have even been the same artist; I’d need to look again – it could have been the inker) – the art became very dark, where 90% of the issue was shaded in black (included Deathlok). It began to remind me a lot of Jae Lee’s artistic style (and don’t get me wrong, Jae Lee is an amazing artist; but it’s not an artistic style I enjoy). As a matter of fact, Jae Lee did a guest cover art or two in the series (probably because the art inside was similar to Jae Lee’s art). The art would even go on to become the “cliche, bad 90’s art style” where everyone has long hair and wearing sunglasses, and looks way over the top. This inconsistency made it difficult to enjoy the series. 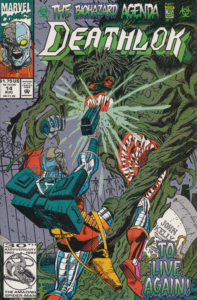 Where the series also fell short was it’s villains. Deathlok never had a villain to call his own, that pestered him throughout the series. And the unique villains he had were less than… lame? For example, there was the villain, Biohazard… who… I can’t even put into words. Was a brain that was experimented on (of a former Deathlok initiate, who perished – John Kelly), that gained its own sentience, consumed whatever it could, trying to rebuild it’s memories and make sense of itself. I can’t put into words just how much I disliked the entire story, concept, art, even the look of Biohazard. There was just nothing to the villain. We did get to see Moses Magnum, who seemed like he was going to be doing something big – but then, he pretty much falls off the pages of the book until much later in the series, as if the writer suddenly remembered that he had put Moses Magnum in the book earlier as a potential villain for Deathlok to face off again. They say that a hero is only as good as his villains; and because of that, I feel like this Deathlok series suffered, now that I re-read it. (I am sure my teenage self thought that a living brain out to consume Deathlok was a “totally radical idea”). 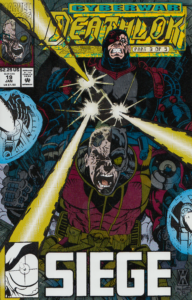 I feel like the series knew they were in trouble, and needed to make the book stand out; because for no reason at all, Deathlok #19 features a foil cover. Even now, I can’t figure out why, other than they were desperate to catch the reader’s attention. There’s nothing special about this issue. Foil, trick, covers, were usually reserved for special issues, or issue #25, #50, etc – like land mark issues. However, issue #19, has nothing special to the story. It’s not the first issue of the CyberWar story; it’s the third issue (out of 5). There’s literally no reason for a foil cover and a hiked up price cover, because of the foil cover, for this issue. As a matter of fact, this CyberWar story introduces a character named Siege; who, like Deathlok is part human, part Cyborg. Now sometimes, things like this work out – when you introduce a “villain” who is, in many ways, much like our beloved hero. The most famous (in regards of Marvel), I would think is the comparison of Wolverine and Sabretooth. However, Siege, like the rest of the villains that were introduced in this series, simply fell flat. 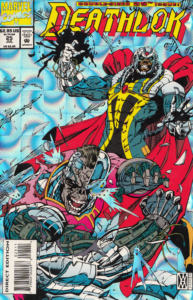 As I said, early in the series, Moses Magnum was shown as a potential villain for Deathlok, before seemingly being forgotten – before resurfacing for issue #25 (look, another foil cover!) By this time in the series, it’s included guest stars such as Forge, of the X-Men in issue #2 (though, really, even though they have him on the cover, he’s in it for like 2 pages), Misty Knight, also issue #2, Doctor Doom, Thing, Mister Fantastic, Reed Richards, and Wolverine in issue #5, Punisher in issue #6, Ghost Rider in issue #9 and #10, Infinity War crossover in issue #16, Silver Sable in issue #18, and then Black Panther in issues #22-25. The story arc introduces Killjoy as a potential villain; who has an adamantium sword (really? Adamantium? How common is that, these days? Why couldn’t it just be really sharp vibranium, you know, since they’re in Wakanda during this storyline? But, I digress…) – however, once Killjoy is defeated, he literally turns into a whimpering, cowering, loser. So… the potential, killed in two issues. Anyway, with issue #25, Moses Magnum makes his plans known and attacks Wakanda, and Deathlok wants no part of the war, until he sees a young boy killed, thinking it’s his son; he realizes he has to take part, and Moses Magnum is defeated. The Wakanda story is an interesting one, and one that could have been much better, had they not ruined Killjoy as a potential reoccurring villain for Deathlok. 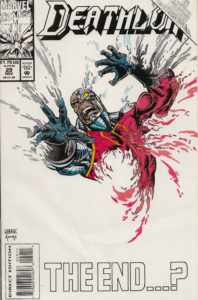 As I mentioned in the previous paragraphs, between the random foil cover for issue #19, and the insane amount of guest stars throughout the series; it definitely felt like they were trying to keep the book afloat, through those guest appearances. And normally there’s nothing wrong with that – all those character cameos were characters that were quite popular in the 90’s – so it’s a natural tactic to have someone pick up a new book to read it because a character they enjoy happens to be on the cover and in a few issues. But the problem comes from that the book seemed to rely on those guest appearances rather than making them organic. Each time someone guest appeared, it seemed to be just for that quick story arc; and then when it was over, the next issue didn’t feel like it connected to the previous one smoothly. So it was more about having those guest appearances, than making a story that seemed to flow. As the series was approaching end of life, it crossed over into the Infinity Crusade where “The Goddess” appeared and told Michael Collins (as Deathlok) that she had kept an eye on him; and then realized, “No wait, you’re not the right one. You’re not worthy after all.” Which sends Michael Collins into this deep thinking issue of why he (and Siege, who was with him) were not worthy and what they had done that was so wrong. Then, Luther Manning (of the current time) begins dreaming that he’s Deathlok and becomes Deathlok, eventually. That’s when Timestream (an ongoing villain for Deathlok, who talks like Yoda – and no, I am not even kidding – shows up and rants about how he will rule the time lines, or something). 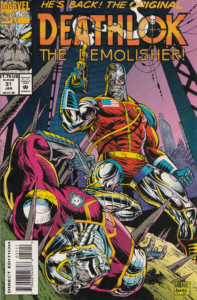 That’s when they bring in Luther Manning as Deathlok in the ongoing; but that’s when Timestream makes a third version of Deathlok; so that there’s literally three of them running around in the final story line that involves an overly convoluted and senseless plan revolving the time paradox, and it even involves the Time Police (wish I was kidding here; reminded me of New Gods, meets Judge Dredd, meets the Sylvester Stallone version of the Judge Dredd movie). Essentially, Luther Manning dies, Michael Collins and the Timestream Deathlok version team up; stop and kill the future Timestream, and save the current version of Timestream, who will go on to fulfill (and repeat, I assume?) his destiny. And the Time Police (actually called – Time Variance Authority (or TVA)) are thankful for the timeline being set right, and send Deathlok and Timestream’s version of Deathlok back to their proper time lines. The two Deathloks think about how Luther Manning saved everyone, and the time line, and thank him for his service.

Over all, I’d give the series a “C-.” It’s just below average. It has it’s really good moments, but it’s out weighed by, what I feel is a lack of pacing and artistic problems (for myself, others may utterly disagree with me)!