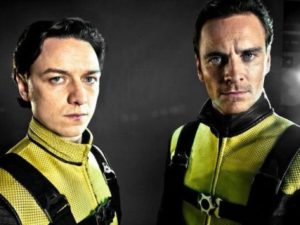 So they’ve now confirmed that Michael Fassbender will not be in the upcoming New Mutants movie … and James McAvoy won’t be in the movie either… so if it won’t be Professor Xavier or Magneto leading (or bringing) the team together… one wonders, what will bring this rather oddball team of young, new mutants together?

We know that Maisie Williams (Game of Thrones) and Anya Taylor-Joy (Split – where, ironically she shared the screen with James McAvoy) will be playing Wolfsbane and Magik, respectively. Along for the ride is Moonstar, Cannonball, Sunspot and Warlock. Aside from the fact these characters are coming from different areas (Wolfsbane – Scotland, Magik – Russia, Moonstar – Native American, Cannonball – Kentucky, Sunspot – Brazil and the most unusual of them all is Warlock who comes from… well, outer space!)

I seriously doubt we will be seeing Patrick Stewart or Ian McKellen will be returning as Professor Xavier and/or Magneto for this. So, while I don’t want to begin worrying… I am already beginning to worry… I am not seeing how this team can come together without a leader. Could it be that we will be seeing Josh Brolin (who will be playing Cable in Deadpool 2) as the one who is pulling this team together? A variation of when Cable lead the New Mutants, before forming the X-Force team that he was most widely known for leading? If that’s the route they go, I would certainly be okay with Cable being the leader; and with Cable’s time jumping, an advanced weapons and equipment (that we can assume is somehow going to work smoothly in Deadpool 2) would certainly allow for him having, or at least, making some connection to Warlock.