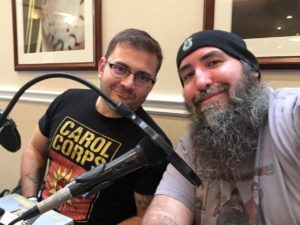 Day One – We’re Saucy And Ready! 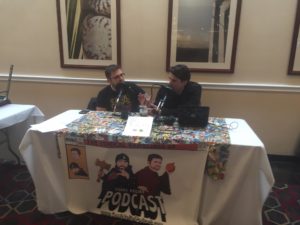 Maico sits down to speak with Matt, of San Diego Comic Fest.

It worked out beautifully, as droves of people walked by and engaged in conversation with us; landing us interview after interview after interview, with folks interested in everything from comics, kingdoms, movies, anime (and Godzilla), race car comics, other conventions, games, and included some comic book writers as well! It was so amazing how well received we were at San Diego Comic Fest, and how many people were so willing to speak with us. 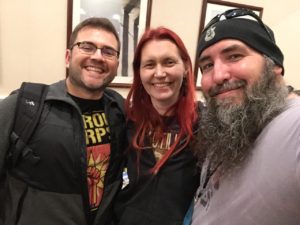 If the Con is in San Diego, good chance you will see the three of us together.

Our good friend, and partner in crime, Colleen, owner of Wyng’d Lyon Creations was there – well, correction, as I write this – is there vending her incredible assortment of merchandise. Maico and I considered doing our table on Monday, when this all started, but as I said, we were so busy with so many people coming by our booth – I literally have six hours of audio to go through. We wanted to make our 25th Issue of the Comic Relief Podcast “double sized” as Marvel used to do back in the day with 25th issues, and we met and exceeded what our expectations were! So there was a few more people we were hoping to speak with on Monday, but we already have too much to work through as it is! (So if we didn’t get a chance to speak with you, contact us on the site, or Twitter, or Facebook page – all linked over on the right!) – and reach out to us, and we can schedule something for a future episode using Skype (if you’re not local, and maybe even if you are local, just might be easier!) 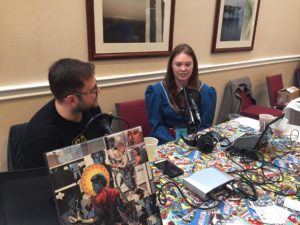 One of the fine maidens, Lady Kiaya, of the Sovereign Kingdom of Terre Neuve. 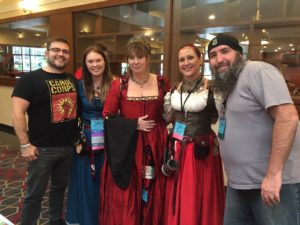 We met so many cool and interesting people, that, had it not been for our booth, we would have never gotten the chance to know them! For example, the wonderful ladies of the Sovereign Kingdom of Terre Neuve. They came by to talk about their kingdom and the events that they do (including activities that earn members a chance to enter the Knighthood). One of the fun things I did, during the interview they had explained how Knights will duel to earn roses to give to the maidens. So what I did was go over to Colleen’s booth (Wyng’d Lyon Creations, mentioned previously!), who had ironically just began creating and selling these flowers where the petals are made out of comic books. So I bought one for each of the fine maidens, and the Queen and presented it to them, saying, “The Lord gives the Fair Lady/Queen, a rose.” Was really fun to interact with them, they stopped by a few times to talk with us (just in general) because they were a few tables down from us. Really amazing people, and if you are interested, I highly recommend checking out their site that I linked just above, for their Kingdom. 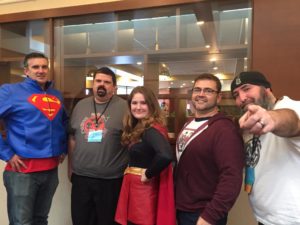 Some other cool people we got to talk to, was Shawn Mullen and the Sci-Fi Coalition which is just starting up. They came by and sat with us during an interview. I highly recommend checking out their Facebook Group as well as checking them out on Twitter. They plan to do events on a regular basis, which includes dressing up in cosplay for specific movie releases! So if you’ve got a pirate costume (Who? Me?) and you have the urge to dress up for Pirates 5, or if you have a Harley Quinn costumes for that 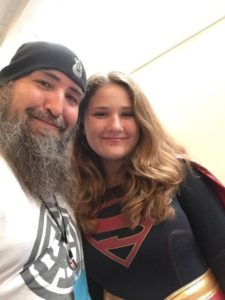 Shane of the Sci Fi Coalition’s daughter – as Supergirl.

next Suicide Squad movie, or whatever the case may be – check out their site, their Facebook page, and their Twitter for those schedules and see if you’re interested in becoming a part of the Sci-Fi Coalition, or at least do events with them from time to time!

It’s going to be virtually impossible to even go over everything in this blog without rambling too long (besides, there’s – as I said – 6 hours of podcasting audio to go through! So you can get the feel of everything – and all the excitement and fun when I finish doing that editing!)

But I want to thank everyone who stopped by our booth and gave us a little bit of their time, and their excitement about their hobbies and talked to us. The amount of people that came by – whether they interviewed with us, or just came by to talk, or ask us technical questions in regards to podcasting – it was a pleasure! 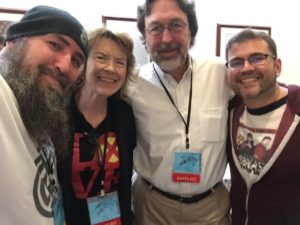 Us with Eric & Julia Lewald of the X-Men: The Animated Series fame!

There is one big shout out I want to do, however. And that is to Julia & Eric Lewald, of the X-Men: Animated Series. I had reached out to them on Twitter about doing an interview with them, because both Maico and I were huge fans of the series (I own them all on DVD, and ripped them to my external USB that I take with me when I go on vacation, if that tells you anything!) And they were extremely receptive to doing the interview; and then I learned that they were going to be at San Diego Comic Fest, I knew this was going to be an incredible experience if we could do the interview there. Julia & Eric were very busy at San Diego Comic Fest, celebrating the 25th Anniversary of the X-Men Animated Series (has it really been that long?!) – so I wasn’t sure, despite best efforts if they were going to have the time. But they made the time. And it is, without a doubt, my favorite interview we’ve ever done. Perhaps because I was so closely connected to what we were talking about; or just the connection of how easy everything flowed. I can not thank Eric & Julia for making this year’s event X-Tremely Memorable.

Here’s some other cool photos: 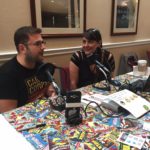 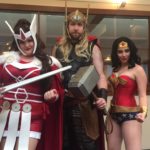 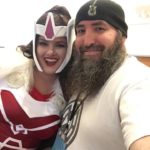 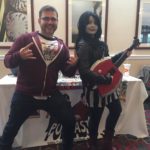 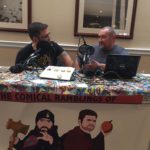 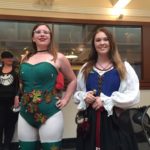 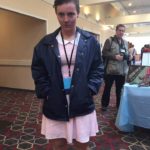 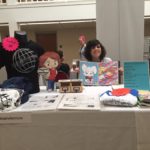 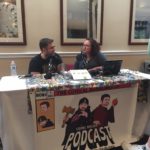 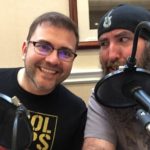 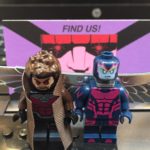 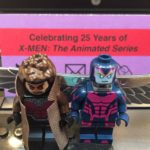 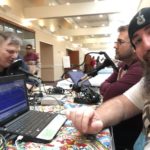 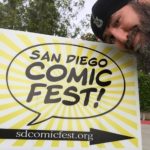 All of these, and more can be found on our Comic Relief Podcast San Diego Comic Fest 2017 album!

And a bonus – Thanks to Tammy Stevens for sending this to us! Maico made it into the news (see him sitting down just at the end of the clip!) – I was unfortunately, being blocked by the guy standing at our booth (you can see me arm, wow!) as I was speaking to the Queen of Terre Neuve. Check it out on our Facebook page! Or just click it below: