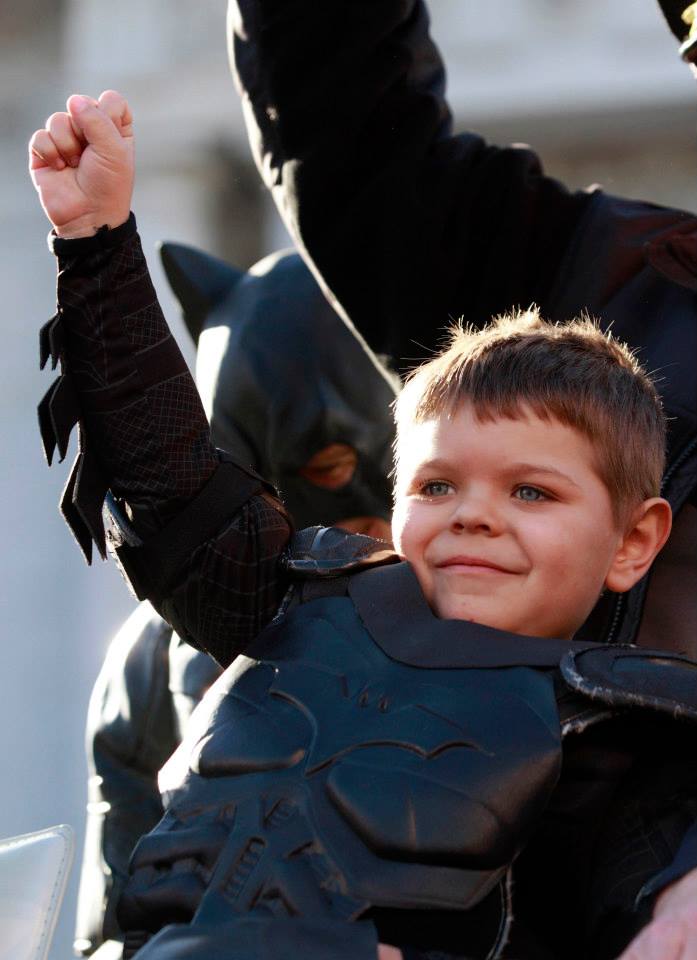 It’s not every day that a child swoops in and saves an entire city. But that’s exactly what Miles did, dressed as Batkid through the Make A Wish Foundation. Miles, at the age of 5, is a hero to the people of San Francisco as it was converted, for one day, into “Gotham” – and while he battled the likes of the Penguin and the Riddler – Miles is battling a tougher battle – he’s fighting leukemia.

Stefania Pomponi, founder of the Clever Girls Collective, had contacted the Make A Wish Foundation and extended her help in making all of this come to life. Stefania Pomponi and her staff reached out to Twitter, who responded by providing the @SFBatKid handle. With the help of social media – the event that would unfold – simply exploded. Bat Kid’s make a wish dream had become viral and spread rapidly across Twitter, Facebook, and even the news. 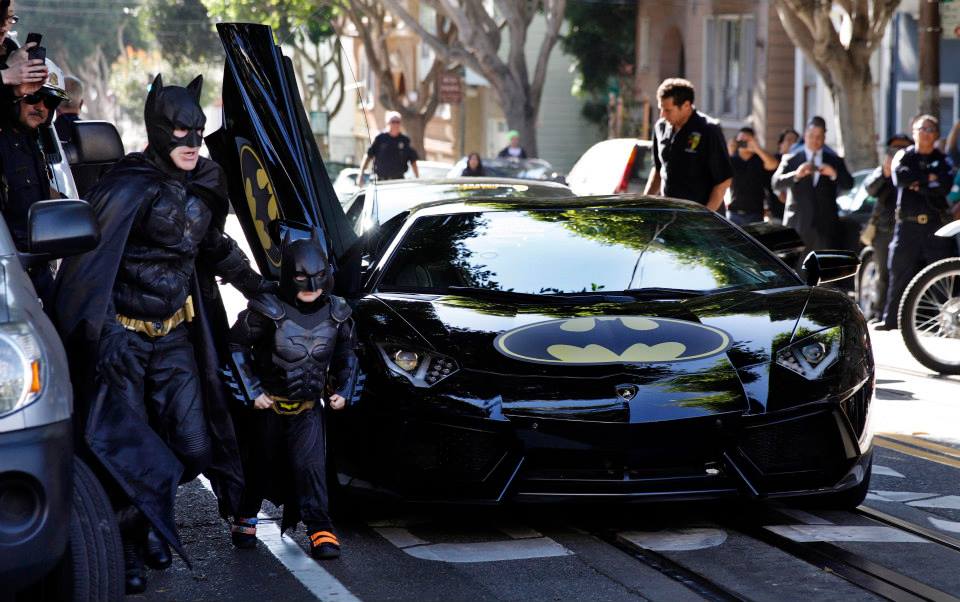 In an amazing display of restoring faith and humanity to the human race, the people of San Francisco gathered and cheered on Miles (dressed as Bat Kid) and an adult sized Batman as they arrived in a Lamborghini adorned in the Batman Logo. From there, they battled the Penguin, the Riddler, and even saved a beautiful damsel in distress!

As Bat Kid made his way through San Francisco, he was cheered on by hundreds of people who had gathered to show their support – many of them wearing the official Bat Kid T-Shirt. Kid Monarch Clothing, based in San Francisco, created this shirt, with 100% of proceeds benefiting Make-A-Wish. 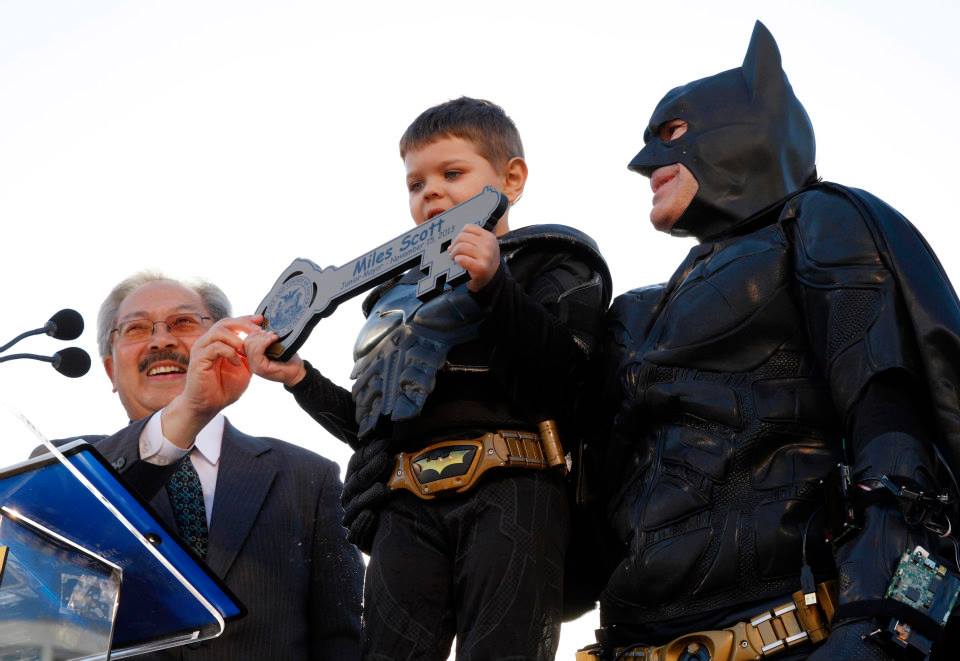 Another story that also went viral, but did not get as much news coverage is the Story of Dennis. 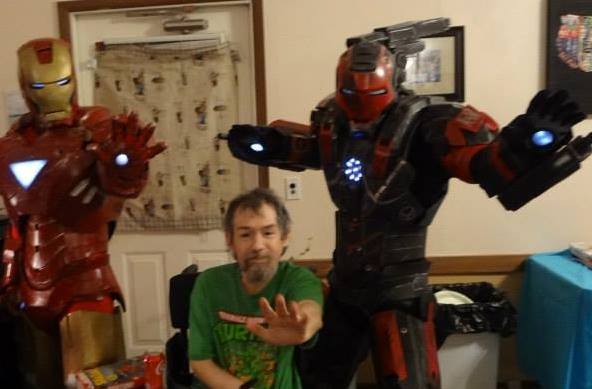 Dennis, like Bat Kid, was a fan of all things Super Hero related. With super human like strength, Dennis fought every day – you see, Dennis was both physically and mentally disabled. However, the fight would take a more tragic turn as Dennis was diagnosed with terminal cancer and given 5 to 6 months at the most, to live. Dennis’ good friend, James Fipps reached out to David Johnson, and expressed his desire to do something special for Dennis – because this would be Dennis’ final Christmas. Reaching out to the Cosplay Community, they asked them to send photos and cards, of them dressed up so that Dennis could have a Super Hero filled Christmas.

Once again, the Super Hero Community responded. Facebook posts were shared, tweets were retweeted, and soon enough, a few news stations picked up on the story. That’s when it really started going into full motion. 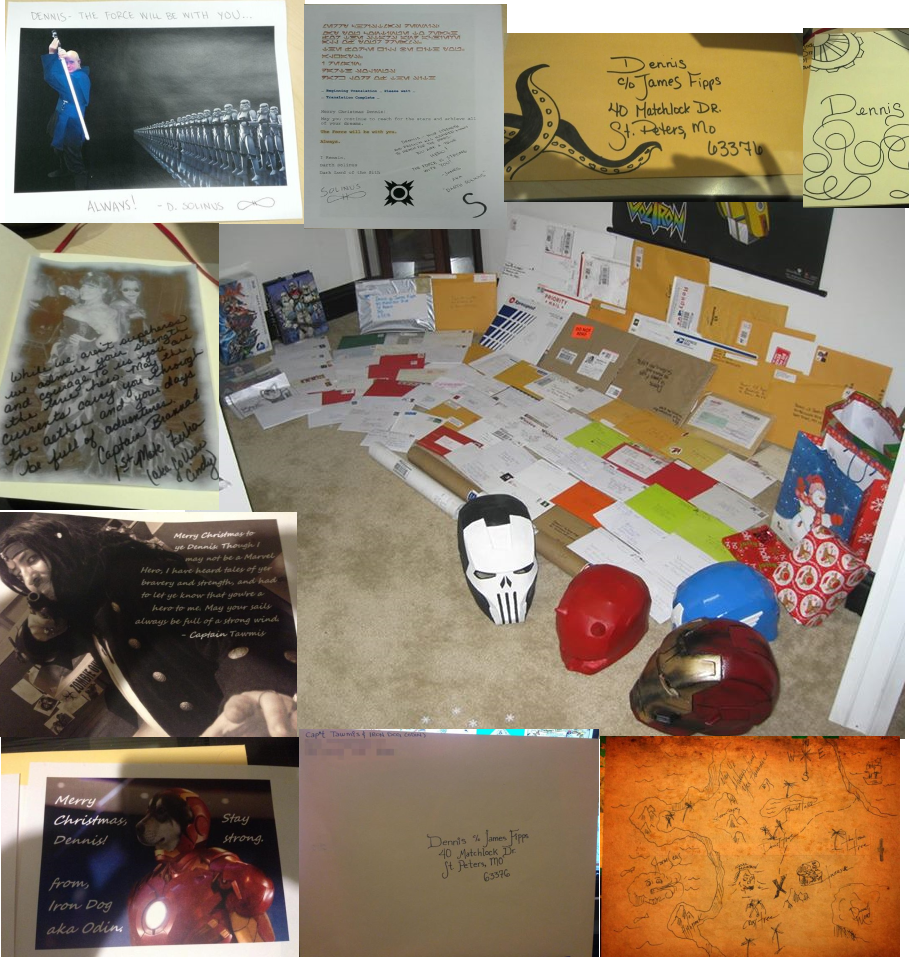 I don’t even recall how I first heard about the story, myself. I know it was on Facebook – but who or how it came across my feed, I couldn’t even begin to remember. I just knew I wanted to do something. However, I had no costumes of Super Heroes myself (though I have a closet full of Super Hero T-Shirts). So I decided I would send Dennis a picture of my dog, who I had once photoshopped into the Iron Man armor (you can see what I am talking about here). However, as I thought about it more – I wanted to send something from me as well. So I used a photo of me dressed as a pirate, and sent a photo with a note on it. It was great to see two fellow co-workers, and very good friends, also get involved; James Edmiston and Colleen Rodriguez also prepared and sent things to Dennis. I thought it was great we all shared a part of our passion; James had sent a picture of him dressed in his Star Wars attire; Colleen had sent a picture of her and her friend Cindy in their Steampunk attire; and I had sent a picture of me dressed as a pirate. I had even gone as far as decorating the back of the manilla envelope like a pirate’s map; and Colleen did the same, decorating her card with gears; and her envelope with tentacles – giving it a very Cthulhu look.

Sadly, on December 29th, 2013 – Dennis left the mortal world to continue the fight in the Realms Beyond. I am not sure who created this image (if someone knows, please let us know on our Facebook or Twitter page – I’d love to give proper credit for all of these photos used here) – but Dennis loved Hawkman and Green Lantern, and someone created an image of Dennis as a Green Lantern.

In the brightest day, in the blackest night, no evil shall escape my sight,
Let those who worship evil’s might, Beware my power, Dennis’ Green Lantern’s Light! 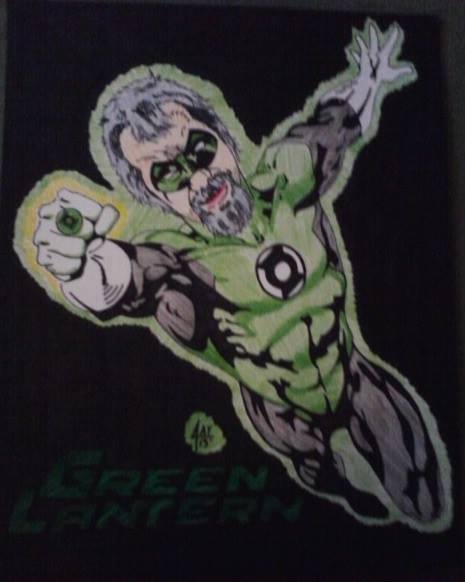 Bat Kid photos were taken by: Paul Sakuma
Dennis Collected Envelopes by: James Fipps; addition of mine and fellow workers by me