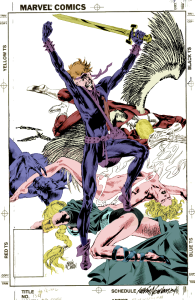 I wasn’t kidding, when I said, in an early post, that if a cover of The New Defenders gets posted in B&W, that I will save it and eventually recolor it myself. This is New Defenders #134, which introduces a character I actually really enjoyed; none other than Manslaughter. Yes, I am a fan of the super obscure characters, and characters with a fairly unique power set or a power that has a twist to a common power. In this issue, in order to prove himself a valuable member of the Defenders, Manslaughter actually goes about killing the New Defenders – well, not really killing them; just proving the fact that he could kill them if he wanted to, proving that if he could beat all of the Defenders, then clearly they needed him on the team. Unfortunately, Manslaughter, along with Valkyrie, Moon Dragon, Gargoyle, Cloud, and Interloper would meet their end in The New Defenders #152 when the series came to an end. However, thanks to Solo Avengers, we see the resurrection of Moon Dragon and Gargoyle; and over in the pages of Doctor Strange the other members are eventually saved as well. (Though we never see any of them again, really, except for Valkyrie).