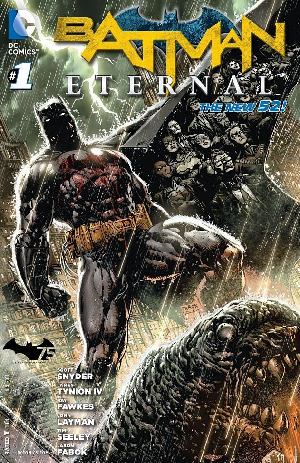 It’s not secret, that I was not a huge fan of Batman “back in the day.” I believed that he could never be beat, and always had the solution, no matter how dire the situation, always outshining other heroes, except for maybe, Superman. This was why I was a Marvel “Zombie.” I consumed Marvel Comics like I was starving. I collected a wide variety of titles from Marvel Comics, though my staple titles were Uncanny X-Men and Avengers, back then.

In recent years, Marvel Comics didn’t seem to have the same spirit, that I was looking for in comics. I picked up a few titles, such as Aquaman, Hawkman, Teen Titans (or Titans, depending on what they were calling the book), Outsiders and a few others. But my DC collecting was very, very sparse.

Rebooting the entire DC Universe? Starting every issue from #1? This seemed like a good jump on point, and a chance to experiment with DC. As a result, I picked up just about every single title that DC launched. For the most part, I actually kept collecting them as well. Only a few eventually lost my interest – but suddenly my pull list went from being majority of Marvel titles, to being dominated by DC titles, and even going as far as dropping some of the lesser Marvel titles, to afford more DC titles.

So with all of that said – the first review I would like to do will encompass BATMAN ETERNAL numbers 1 through 4.

BATMAN ETERNAL is a weekly title – and this made me think that the quality of a book coming out every week – was going to suffer. That the title would have a weak story or rushed art.

First, let’s talk story. Initially I thought it was because I had low expectations for a title that was going to be coming out once a week – but I have re-read the issues, and no – it’s actually a great story, simply because it is a great story! Ladies and gentlemen, this story is set up nicely – and it flows so smoothly. It leads into what I consider a very, major event and drastically changes the dynamics of several characters in this book. I am enjoying that this is not just a short story, that’s solved within a few issues – but clearly one that is a long, reaching story – that will encompass quite a few issues! I don’t want to get into spoilers, but I can’t recommend reading this story enough!

Then there’s the art. I admit, the first four issues (I believe all four were the same artist) – Jason Fabok. This guy can draw – and he can draw well. I am pretty new to DC, but I can say that his art is pretty top notch and he nails Batman perfectly. It was a bit jarring when I read issue #4, and the artist switched to Dustin Nguyen. Dustin has a great pen, but I am not a fan of how he draws faces. It seems weaker (or at least, for what you’d expect for such a dark story) than what Jason gave us in the previous issues! (I believe that the artists will change from issue to issue, from here on out). I hope that the artists don’t change too much, that I lose interest. Because the art is just as important as the story – if I have to pause and try to figure out who the character is in the panel, it yanks me out of the story.

This entry was posted in Review. Bookmark the permalink.