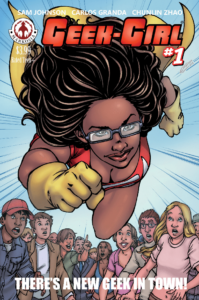 First, a very special thanks to Sam Johnson, the creator of Geek Girl for reaching out to us to review this! Second, extreme apologies to Sam Johnson, who got this to us back in July to review! But hold! It might just work out, because Sam Johnson is launching a Kickstarter for Geek Girl in less than a week – on October 1st, 2018! So head over to the Geek Girl Kickstarter for some more details! I’d like to say that was beautifully intended, but it just happens to be a happy coincidence!

The story follows Summer, better known as Geek Girl, a super hero who is – by the looks of things, still learning the ropes! She’s a very beautifully drawn young woman, who can fly and seems pretty invulnerable! She also teams up briefly with a more, seasoned hero, that the city seems very well aware of, by the name of Pit Bull (who, yes, dresses up sort of in a dog like costume! Now before you shake your head at the idea, just remember The Tick and how successful he is!) 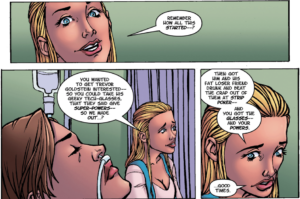 Now I was really into reading it, but the scene shift, pretty early on (right after we see Geek Girl’s debut), switches to a hospital scene – which I felt like broke the action pacing from Geek Girl, herself.

Sam and company are clearly setting up a mystery, because there’s mention of tech-glasses giving super powers; which seems very similar to what Geek Girl is wearing. So there’s the question of what happened to this girl, and are the glasses they’re talking about the same ones being worn by Summer that have transformed her into Geek Girl?

The arrival of several other girls, who clearly don’t seem to be friends with the young lady in the coma crack some pretty crass jokes and laugh about how she’s a vegetable. So it’s clear that there’s not a strong friendship here between the mysterious girl in the coma (Ruby) and the rest of these girls. Because these hospital scenes happen between action segments, I would have (personally) started the comic with this. So that there’s this mystery, then allow the rest of the action to flow naturally, rather than interrupt the action with cuts back to the hospital. But then, Sam is the writer, and I’ve got no published writing under my belt, so there’s that!

It isn’t long into the first issue, you discover that indeed, the glasses Geek Girl wears once belonged to Ruby, further deepening the mystery, as to what happened to Ruby (and it’s also revealed that, it seems she went by the name Geek Girl previously… or maybe, Neon Girl – it wasn’t very clear when I read it – when she was wearing the super powered glasses).

The scene shifts and we see what appears to be some normal bank robbers hitting a bank; but as they get away, they use a portal of some kind to make good of their escape!

This whole thing is to recruit more people into their organization. (I wish we would have gotten a cool “villain” team name for this organization in these panels). 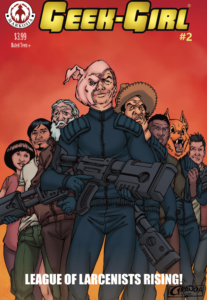 However, the second issue seems to be hinting at a name for this criminal organization… The League of Larcenists. The issue opens with Terry talking to (I assume) his wife, and explaining how a woman named Lightning Storm took down Neon Girl, and took down this new Geek Girl and put her in a coma (which I assume is Ruby, and not Summer, that got a little confusing).

Now what I found even more confusing, or perhaps jarring, was the fact that Terry’s wife (I assume), reveals that Geek Girl is out of a coma, and the picture shown definitely doesn’t look like Summer (so it appears to have been old footage of perhaps Ruby, when she wore the Geek Girl outfit). The fact that Ruby is awake from the 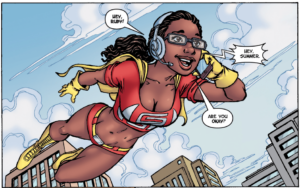 coma is confirmed in the next panel, as we see Geek-Girl (Summer) flying through the sky and talking on the phone to Ruby, and asking if she’s still at the hospital (to which she says she’s not, that she’s now at her parent’s home). This was a bit of a shame I thought, because I felt like there was going to be a mystery building up to what had happened to Ruby (if she was like Summer, it would have seemed she would have been invulnerable), but with her awake, it seems to 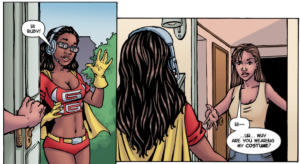 take the “Urmph” out of the mystery. This is further evidenced that not only did she go from tubes in her nose to walking and answering the door when Geek Girl shows up at her parent’s house.

However, in a surprise twist, she does request that Summer leave the glasses, since they do belong to her. Summer leaves and gets caught up with a robot attempting a robbery, forgetting she no longer has the tech glasses that give her powers, so she’s forced to flee, and catches a ride with her friend Josh who is wondering why she’s wearing Ruby’s costume. This goes poorly for Geek Girl as the robot catches up, and smashes her headset before she can tell Pit Bull where she is!

And that’s where issue #2 ends! Now despite the little quirks I mentioned, this comic is a very fun read; the art is absolutely fantastic. I highly recommend everyone check it out – and don’t forget to check out the upcoming Kickstarter too!